California’s Campus Movements Dig In Their Heels Over Tuition Fights 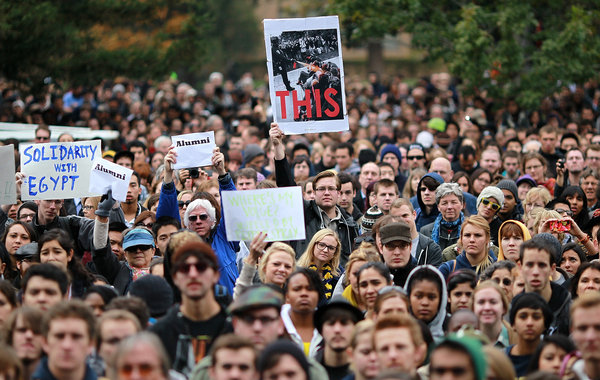 Protesters at the University of California, Davis, have been calling for the chancellor to quit since a pepper spray attack Friday by the police.  LOS ANGELES — It has become something of an annual tradition on California college campuses, in what is perhaps the most prestigious state university system in the country: the state makes large cuts in public universities, they in turn raise tuition, and students respond with angry protests.

Some were vehement Monday during a speech by Chancellor Linda P. B. Katehi of U.C., Davis.

But this year, propelled in part by the fervor of the Occupy Wall Street movement and in part by the state of the economy and California’s mountainous budget woes, the battle is sharpening. Indeed, the Occupy movement — on campuses, at least — is transforming itself into a student-led crusade against increases in tuition.

A video that showed two University of California, Davis, police officers using pepper spray on seated protesters has gone viral, with hundreds of thousands watching what might have been a relatively small encampment compared with the larger protests across the country. The video has led to demands that Chancellor Linda P. B. Katehi resign. On Monday, Ms. Katehi said she was putting the campus police chief on administrative leave as a way to rebuild trust on campus.

The attack has galvanized protesters on other campuses. Students at the Los Angeles, Berkeley, Riverside and Davis campuses said Monday that they intended to restart their encampments Monday night, in part to test whether they will be rousted or arrested in the wake of the pepper-spraying.

After years of watching the state’s budget for higher education erode, they are demanding that the state and university administrators find a way to lower tuition that they say is squeezing out the middle class.

“These are institutions that we call the people’s university, but all of us who are in it have just watched this thing collapse on itself being starved for resources year after year,” said Lillian Taiz, the president of the California Faculty Association, the union that represents professors in the California State University system. “What keeps happening is that we are turning the university into a place where really only the wealthy can go. The students are watching their parents fall out of the middle class and watching their own ability to move into it be sabotaged.”

Tuition at the University of California has nearly doubled over the last several years, and next year the system will collect more money from student tuition than from state revenues. And with the state budget situation worsening by the month, the Legislature seems likely to impose another $200 million in higher education cuts next year. Last week, the California State University Board of Trustees approved a 9 percent tuition increase, even as it cuts courses and student services.

“For the last several years, the debate has been what are we going to cut, but we need to change the conversation to who is going to pay for public education?” said Kyle Arnone, one of the protest organizers at the University of California, Los Angeles, and a graduate student in sociology. “We are forcing people to consider the financing of education in a larger context.”

Like many of the organizers involved in the protest, Mr. Arnone is a member of the union that represents graduate students. The union is part of a coalition of labor groups and other organizations that are pressing to close a loophole in the state’s property taxes and to increase taxes on the state’s wealthiest residents. Mr. Arnone said the organization hoped to pressure the regents who oversee the system’s budget to sign a pledge backing the changes in the state’s tax system.

Mr. Arnone said he expected dozens of students to camp at U.C.L.A. overnight Monday. At the same time, other students are planning to camp out and guard a Bruin statue, the campus mascot. The statue is often vandalized this time of year, ahead of the football game against the school’s cross town rival, the University of Southern California. “We’re going to make them deal with whether they’ll selectively enforce their laws.”

The University of California president, Mark G. Yudof, convened a conference call with the chancellors of all 10 campuses, urging them not to use police force to respond to “peaceful, lawful protests,” said Daniel M. Dooley, a senior vice president for the system who participated in the call. The president also plans to create protocols to detail how the campuses should respond to the ongoing protest.

Mr. Dooley said that he did not expect Ms. Katehi to resign and that President Yudof had confidence that she could move the campus beyond the incident.

Thousands of people gathered on the Davis campus for a noon rally Monday where Chancellor Katehi spoke. Organizers of the protest there told her she should wait in line with other speakers.

“I am here to apologize. I feel horrible for what happened on Friday,” she told the crowd. “I don’t want to be the chancellor of the university we had on Friday.”

She added: “I know you may not believe anything I am telling you today, and you don’t have to. It is my responsibility to earn your trust.”

Administrators in the U.C. system have long complained about the state’s budget cuts and in many ways are sympathetic to the protesters’ demands.

“The rapidly rising fees give us all heartburn,” said Gibor Basri, the vice chancellor for equity and inclusion at Berkeley, who has met with the protesters several times. “We don’t believe that higher education is a private right but a public good.”

Mr. Basri added: “The problem is that the protesters aren’t one group. We’ve got protesters who want to take the place down, and we have very responsible student leaders and everybody in between. When it gets tangled up with how the university responds, it makes things more complicated.”